The Bret Hart Best There Is Thread 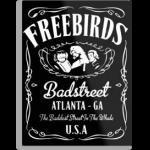 By Hagan,
April 8, 2019 in The PROFESSIONAL WRESTLING