I’ve long had the idea that the board would be a great place to compile a list like that, only with matches. Now would be a great time to try it, with everything that is available on the Internet and the WWE Network.

I figure it could be put together as an e book, and be sold as a fund raiser for the site.

I found that message again this week as Justin’s birthday was December 6 and those of us who are still friends with him on Facebook got the reminder (I still struggle with the whole deceased Friends thing – and I am sadly up to 3).

For those not tracking with me – Justin Newbould had been a long time member of the DVDVR community posting under the name “Newb82”. He loved wrestling, horror movies and the Buffalo Bills (Hey! We all have our faults.) He had gotten sick and even through his stays in the hospital get in touch with the board and with board members he considered his friends. The day he left the hospital was a good day.

Anyway, the discussion came up on the board about finding messages from Justin that folks had never deleted. It had made me smile because at the same time I had just found emails from my Dad sent 10 years that contained some of the only photos of him with his grandson. I then got a PM on the board that filled my mailbox so a purging I went… only to find messages from Justin including the one above.

My initial response to Justin was as follows

Plus we would also not have to be lazy”

All of that remains true but circumstances have changed.

1) I have yet again gotten the urge to try and make the Death Valley Driver Video Review back into… something. Lord knows what that is but when you realize that one of the few things you have to show for your 40 years of existence is this domain, its sorta love of pro-wrestling and things beyond and its people eventually you accept the grim reality that this is your life.

2) I sit here – approximately 18 months later – trying to ignore the cruel irony that the man who presented this project is now dead. Sigh…

So with my nonsensical ado, I am announcing the DVDVR 1001 MATCHES WE REALLY THINK YOU SHOULD WATCH IF YOU CALL YOURSELF A WRESTLING FAN BUT HEY, WE ARE NOT YOUR MOTHERS SO DON’T LISTEN TO US BECAUSE CLEARLY YOU KNOW EVERYTHING BECAUSE YOU HAVE YOUR YOUTH AND WE HATE YOU FOR THAT

Hmmm… I probably should tighten that up. Okay announcing the DVDVR 1001 MATCHES! (And yes – I realize that Justin wrote 10001. Fuck that noise.)

Not sure how long it will take me and when I will roll out matches. I have reached out to others for feedback so this will be constantly adapting.

Yes – I will keep a record all the matches in one place (that will get cleaner once I have time).

So….. yeah, I find inspiration for content in weird and depressing ways. This one is for you Justin – I will even pick a couple of Bret Hart matches for you. 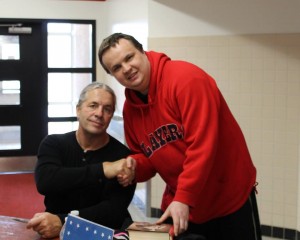