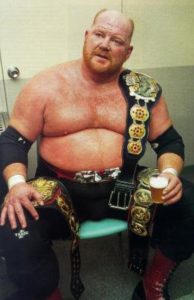 I hadn’t been planning on spotlighting Big Van Vader as he has been represented decently so far over the first 800 matches. But then one of my all time favorites up and died. And now I am sad and just watching him over and over. So, in what should be your quest to watch all the Vader, here are some more recommendations.

Sigh, both are now dead and I am still sad. I will always have the memories of them wailing on each other.

Vader as a “luchadore” will always make me chuckle. Match isn’t really good but it is Vader in Arena Mexico.

Reviewed by DEAN in DVDVR #104

Otto Wanz’s first retirement match. Booking yourself to get mauled by Vader is an interesting way to go out.

Brian Pillman (via Dave Meltzer) said this was the greatest match he ever saw.

“I can vividly recall getting a phone call from Japan on the second night from Brian Pillman, who told me that the match that had just ended a few hours earlier where Keiji Muto pinned Vader was the greatest match he had ever seen. Worse, he noted, it was not taped for television. A few months later, a handheld tape of the match did appear, and the match was incredible for its time. In those days, because of the box seats at Sumo Hall being uncomfortable, they would sell pillows to sit on. The euphoric feeling that enveloped Sumo Hall when Muto pinned Vader, a result nobody would have thought possible, led to what was called pillow-mania, with fans throwing their pillows, thousands of them in the air in celebration.”

One of my all time favorite “bad” matches. Not really bad but it certainly isn’t smooth. If one starts to trace a history of Hoss fights, they are going to stop here at some point.

Vader beating the dogshit out of Inoki is one of my favorite things in wrestling. This isn’t Vader causing a riot but it is the better match.

I probably like this match more than most. Granted my review of it in DVDVR 104 is more glowing than if you asked me about it now. Plus, if you have never seen unprofessional Shawn Michaels… here ya go.

The terrifying team of Vader and Hansen decided that if they are going go out, they are gonna go out swinging. Last little bit of greatness that each of their bodies was willing to give.

Sigh, both are now dead and I am back to being sad.