When Nick Bockwinkel passed away – I was trying to explain my enjoyment of Bock and the best I could come up with was “He was someone that I grew to appreciate more as I got older. Someone who – when matched up with the right opponent – would make me go “Oooh…. this is gonna be good.”

That got me thinking about wrestlers who I love now at the age of 40 that I only really fell in love with in say the last decade. And to be clear, I am not talking about guys who I started loving once I found footage of them (folks like the Brazos and Villanos would fall into this later category). These were folks that I watched when I was young and stupid. Now I love them as I am old and stupid.

These are five of those wrestlers (not in any particular order) 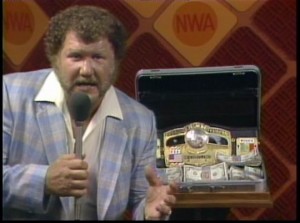 The first – and possibly only – Harley Race match I had seen prior to his WWF run in the 80s was his title change with Ric Flair at Starrcade 83. So I was aware of him and his stature (colored as it might have been by coverage in Apter mags.) Handsome Harley Race appeared on my screen as a child with his blonde hair and I was all “Well… this doesn’t suck.” Harley was just… there for me. Maybe because the WWF was just… there for me. It was obvious that Vince McMahon and Company wanted Race in the federation because who wouldn’t want Harley Race in their fed. Problem was they really didn’t know what to do with him, especially during the time of the juggernaut that was Hulk Hogan.

However – the moment that flipped the switch for me was the moment Harley became the manager for Big Van Vader and became the greatest God Damn thing ever. It’s hard to not love Vader and the crazy ass matches he was having in WCW. But then you add in Harley as a talker and a bump freak and everything clicked.

I hit college right about the time Race’s manager run was ending. But that was the start of my tape trading days which also meant the start of my watching all the Harley Race I could get my hands on. Then the internet blew up and soon enough it became “watch all the Harley Race in Japan.” (Which side note – Harley was involved in one of those early educating my poor stupid rube eyes moments when I learned that Hulk Hogan wasn’t the first person to slam Andre the Giant. Harley (and about 6 other dudes) were all in that club.

Anyway – you have Harley Race: Wrestler

Or you can have Harley Race: Brawler 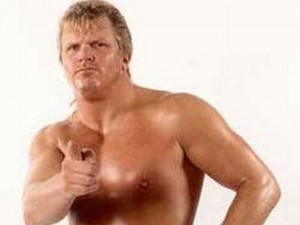 Bobby Eaton is a better worker than either Bret Hart or Shawn Michaels. And I am not talking tag team wrestler, I am talking wrestler, period. (Pounce… period???) I know that only one other person agrees with me on this but there is only so many times you can watch Hart or Michaels work without saying “I never ever want to see them again” meanwhile I curse Eaton’s lack of opportunities and his failing body that prevents him from meandering around Southern indies having a never ending feud with Ricky Morton.

When you are growing up – it is hard not to watch the Midnight Express and not focus on Jim Cornette. It’s hard to not watch the Dangerous Alliance and not focus on Paul E Dangerously. It’s hard to not watch a feud with the Four Horseman and not focus on Ric Flair. That is why it wasn’t until much later that you realize that everything that you loved growing up seemed to always involve Eaton dragging his sad lumps of tag team partners to be the greatest tag teams you had ever seen. Or dragging his sad lumps of opponents to the point where you think a four move guy was your hero.

Dammit – why the hell was I rooting for the Rock ‘N’ Roll Express? Oh right… Stan Lane infuriated me.

Bobby Eaton deserves your love. Whether you deserve to love Bobby Eaton is another matter. Y’all suck. I hope your love of Pink and Black is worth it. 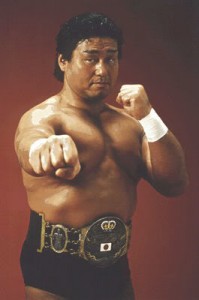 Tenryu is an interesting person for me. He was probably the only foreign star who I had enough exposure too (via working North American stars… or stuffing Undertaker into a coffin I guess) that I didn’t immediately fall in love with (ie: Jushin Liger) or immediately hate (ie: Antonio Inoki). If I was wasn’t living in the shades of gray, I would concede that I liked him more than disliked him. The man has a victory at WrestleMania. What have you done with your worthless life?

It wasn’t until Tenryu started aging exactly like I figure I would age – grumpily – did the bond begin. Of course – it’s hard to not appreciate Tenryu when you met Dean since those basically… oh first 20 years of friendship… revolved around unbridled love of WAR.

THEN I found the beauty that is All Japan Classics and Tenryu suddenly was my beloved crazy uncle who I got to watch when he was young. One might say it was my version of sitting cross-legged on the floor listening to stories about ‘Nam. 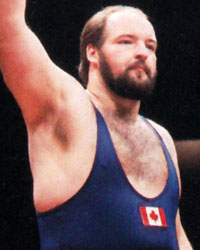 If you formerly competed in sumo – I am slow to warm up to you apparently. The Earthquake debut angle was amazing but then I was like “Well he is fat and there are all these dreamy roided out guys to root for”. I am a fool. This has been established.

“Hey! This guy learned how to wrestle real quick!”

And the less said about the abortion that was the WCW days, the better.

But Tenta was so so good when given the opportunity (or – to beat this dead horse – outside of America). He made all those dreamy roided out guys look like a million bucks, just like he was supposed to. And he was supposedly the nicest person around outside the ring. He really is the most underrated wrestler. 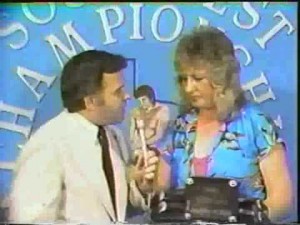 Man – talk about being introduced to someone at the wrong time in your life. Judy Martin was in the WWE right when I started watching wrestling. I was roughly 7 so clearly I was too naive to think for myself. So if the WWE is going to tell me to root for Wendi Richter and Rockin Rebel – I’m going to root for Wendi Richter and Rockin Rebel. I mean they are wrestling a handmaid (again not having any clue at 7 what that word meant). Clearly she is terrible at the wrestling and deserves my scorn.

My shame is upon me like a flock of bees.

Screwed by the perverts who run wrestling and living in the wrong country – Martin was destined to never ever be appreciated properly until WAY after her time. Go watch all the Judy Martin you can (which is sadly way little). I will wait.

I truly think my favorite thing about Martin is her – what I believe the kids call today – “Resting Bitch Face”. She was born to play a heel and play it well.