Just got back from the IWC show at University of District of Columbia, and GODDAM! did it WHOMP ASS! Lucha! In DC! And Zapatista! What the HECK!?!?

<BACKSTORY>
I pick up Hangman Tim and Fatass Matt “Dave” Classic and head up North. Tim comments that, no matter what happens, “bad lucha is better than the BEST Truth Commission Match.” I heartily agree and Luckily, this card delivered in spades, so we never had to think twice about making the trip. We get to the righteous party palace of Phil Schneider. He and Phil the Ripper were rewatching Benoit/Finlay, so we hang out and watch assorted tapes as the Hot Minky Cheetah and the irrepressible Jeremy Billones arrive.

We leave to go to UDC, totally prepared to be told this was all a hideous prank to torture Lucha Fans on the East Coast and we can all go home now, but they were there selling tickets and assorted Latin Wrestling fans were milling about inside, so we went to go eat and come back at six thirty. (SEND FOUR DOLLARS IN COIN OR STAMP TO FIND OUT WHAT TOPPINGS CHEETAH PICKED OFF HER WHOPPER! IT WILL ASTOUND YOU!) We head back and there are about 100 people there, about four times what I expected, and it was a lucha crowd so it was pretty freaking hot. At $25 a pop, I assume they made enough to cover most of their costs I hope. We all rifle through the masks at the gimmick table. Phil got a great Ultimo Dragon knockoff and some youngster there got the super great Tienblas mask. For whatever reason, there are no Zapatista masks there so I don’t buy one, though I was taken by a peppy approximation of a Solar I mask. The ring is hard as hell like it’s supposed to be. There are no guardrails which worried me when we got there, and we sit ringside four rows back – the seven of us together. It was a big big time.

<THE ACTUAL WRESTLING>
The first of the five 2 out of 3 falls matches was a spirited little effort by Halcon Maltez, who armdragged and dropkicked the crap out of Furia Del Ring. After watching a million AAA handhelds, I figured this would have to suck because it was the opener, but this was luckily pretty good and the ending was FREAKING GREAT. These guys were proficient at fabulous basic lucha armdrags and they took it to the mat pretty well. Furia del Ring was a neato eatmachine that cracked everybody up who spoke Spanish (I took a thousand years of French and remember NOTHING of it.)- to quote the Minutemen- “This was when I felt just like a Gringo.” Halcon Maltez takes the first fall with a suitably preposterous submission hold. Furia sets into the suddenly hapless Halcon Maltez in the second Caida, pummeling him with basic rudo offense 101- starting with the first of the deceitful handshake attempts of the night. Furia tears Halcon a new one and gets the second caida. The third Caida basically all set up the truly insane ending. Halcon armdrags the crap out of Furia, sending him to the far side of the ring from us. Phil, Phil and I are in disbelief. There are no guard rails, there is no way he’s gonna… HOLY BEJEEBEEZ! Halcon Maltez hits a totally PhatASS Asai Moonsault into the third row, killing Furia DEAD it seems. We look for stray children underneath the carnage and start to begin to realize that this night is just gonna totally kick ass all night long. Halcon makes it back to the ring before the count as they are giving Furia his last rites. This was a good way to kick things off and we just beginning to get stoked beyond recognition. 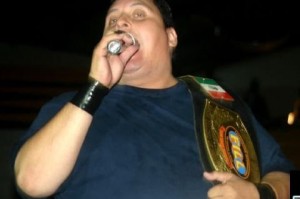 Pancho Tequila- who has a name much greater than the wrestler using it- has a very okay match with the black bedecked Calo. Calo wasn’t Super, but his jacket with the really high collar was boss enough to win over our hearts if the wrestling was WWO-ish. Pancho is a big chub and didn’t do a whole lot. This wasn’t horrible, but the first match smoked it like a cheap cigar.

The third match was absolutely AWESOME! Marvilla Azteca and Tigre Mexicano tore it up with Karonte and Rey Biluvio (or however the guy spelled it for Phil S.). Tigre Mexicano was the freakin STUFF! He was all over the place hitting FANTABULOUS armdrags, running up the turnbuckles into whomp ass head scissor variations, and being as fast and graceful as you can ask of a technico. Marvilla Azteca wasn’t as flashy, but he had the most elaborate outfit of the night, and he was also hitting on all cylinders this evening. Our Rudo combo of Karonte and Rey were topnotch, selling like kings, taking bumps like monsters, and brawling like maniacs- in that “second caida rudo fall” kinda way. The pinnacle of my life as a wrestling fan up to that point was Karonte taking a gargantuan Jerry Bump to the front of the chairs on our side, leading into Tigre Mexicano doing the monster OLD SCHOOL TOPE right into the first two rows. I wanna see the tape because I really want to see it as we all scatter like little pansies. The ending was superfantastic as it turned into one of those elongated rope-running sequences into double roll-ups. This match was CHOICE! 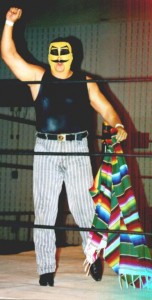 The fourth match was GREAT! Phil, Phil and I mark out like ten year olds in 1984 at a Hulk Hogan match as the SWANKEST mask on Earth containing the coolest Rudo this side of Fuerza Guerrera enters the building. ZAPATISTA walks by and we are in AWE. The mask is even cooler in person. Phil and I start the Zapatista! chant and we just freak out like our mom’s at a Beatle Concert. He is tagging with Bronco, who I haven’t seen since Black Warrior took his mask a while back. He’s solid enough. They are facing the diminutive Super Elektra who is totally nifty in this match (he’s the guy that Juventud Guerrera accidentally broke the face of earlier this year.) Humberto Garza is related to Hector (brother? Cousin?) I’m assuming and had Hector’s moves and tiny tiny pants. He was pretty green looking, and was kinda unsmooth in spots but he didn’t blow anything. Super Elektra in with Zapatista was the highlight of this, as Zapatista was totally in synch with Super Elektra’s quirky high flying, and Super Elektra was not afraid to go the extra mile to hit his goofiest of highspots. My favorite highspot was the double plancha onto Zapatista and Bronco because it was right in front of us. Super Elektra was really neato, which gets lost on me when he was in Promo Azteca because they always put him in with Juventud, Rey and Psicosis, so who had time to watch the other guys. Phil gets his picture taken with Zapatista and we all freak out all over again. A MILLION BILLION STARS.

(Me and Phil the ripper head to the world’s first bathroom and then get fabulous snacks but miss some of the next match because we are behind Pancho Tequila in line and he is scarfing down hotdogs like a Latin Dusty Rhodes. I scarf mine down like a Hawaiian Bastion Booger and we head back in.)

The last match was a spirited little effort by El Satanico, Shu El Guerrerro and Ranger, against Ruben Juarez, Ninja, and Atlantico. Atlantico was that guy who surfaced in EMLL late last year with the Atlantis mask with the Sea Horses on the side as opposed to fish hooks. I assume he is a relation. He was pretty good. Shu El Guerrerro isn’t a great luchadore but he has a cooler voice than Pierroth. I thought that the singer for Coroner had jumped to EMLL. El Satanico was FEELING it tonight a he worked as hard as his zillion year old body could work. He was in total old school rudo form in the first caida but did lots of nifty mat things throughout the second caida. Ranger was good for taking a few cool bumps but other than that, he was unremarkable. Juarez was a decent mid-range luchadore who didn’t hurt anything, but didn’t freak us out like some of the other luchadores on the evening. Ninja was super young it looked like and he did some of the coolest armdrag variations on the night with lightning fast speed. He wins the award for craziest bump off the night as he hit a top drawer PLANCHA ENORME off the top turnbuckle and crushed Ranger and his own knees on the cement floor. The rudos win somehow, I’m too distradted at looking at the shattered remains of Ninja. This kid has a future if he has a future. A MILLION MILLION STARS.

As we leave, we notice that you can tell where Halcon Maltez landed after that Asai Moonsault because there is a bent up chair in the second row. Tim misses the youngsters storming the ring afterwards like they do on those Mexican handhelds as he was busy getting Satanico to autograph his giant Japanese Wrestlers Index book that has the special Luchadores section. Tim said he was quite sweaty. The guy at the gimmick stand says they are coming back in January (I guess to do another three city tour- they also hit Raleigh and Greensboro it said on the flyer). I’ll definitely be there. Angel Azteca was on the flyer as being on the card, so I’m hoping he’ll be there if they make it by again since he is king of the freaky armdrag. We all leave a little happier than we were when we woke up. I hope this lasts forever and we get to see actual lucha every two months at least. I would really dig that the most.

NANIWA~!
– Dean Rasmussen, Still recovering from Tigre Mexicano trying to kill me and the rest of nCo Mid-Atlantic.