For a brief shining moment, I was doing retro NXT workrate reports. The idea was that, starting in September 2013, I would watch from the beginning of 2013 and do workrate reports for them. I was reminded of them, recently, when I uploaded them onto the main DVDVR site. I stopped doing them mainly because I was lazy but also because I gave up on paying for Hulu. Ironically – I wrote my last report a month before the WWE Network came out. In putting up the reports – I realized that one was missing. I know I wrote a workrate report for this May 1st show. I know I did because A) I remember watching it and writing it and B) this was the last match of this batch of tapings and knowing myself and my OCD, I wouldn’t have given up until I at least had wrapped up that batch of shows because my brain sucks.

So – I ended up watching the show two more times and debating how I wanted to write about it. I am too stubborn to write a workrate report for it again. (Mainly – because at this point – the What Worked column would just be Regal’s commentary.) So I guess a review it is. Maybe… I don’t fucking know. Ugh… I hate not being creative.

This week and the previous week (4/24) were showcase episodes as the WWE used a ton of main roster talent as they were trying to get the show on TV. Lot of fat good that did them. Because of that – the shows didn’t “feel” like NXT. Of course – I am not saying that from 4 and ½ years later but still. At least in this case it is WWE Superstar vs. NXT Main Figure as opposed to last week when it was just “Hey – we will have Kaitlyn vs. AJ because fuck all those other women who need in-ring time.” They probably stopped listening after “fuck all”.

Adrian Neville is still ½ of the tag champs despite never actually defending the title or having a partner with two function legs. Oliver Grey had been injured at his point forever and thanks to the taping schedule, they hadn’t done anything yet with the titles. (I am gonna come back to this in a moment.)

This match was fine. Probably better than fine but at this point in time the Colons do nothing for me. Honestly they really weren’t doing anything for anyone when they first signed with the WWE. It is also hard to ignore what a downer two pinfalls in 10 seconds is. I mean Harper’s discus lariat (I so wrote “disco lariat” and just caught it but now I am spending far too long imagining what a disco lariat would look like) is awesome as always but you could have had Neville eliminating a Colon three minutes ago instead a second ago.

This is the blow off to their weird feud. I call it weird because all the outside the ring setup was awkward but when they had actual matches. The whole concept was that in the end Summer Rae was scared to face Paige face to face. This meant you had the time she tried to attack Paige after a match but stopped because Paige saw her. Or two weeks prior when she jumped Paige from behind to setup this match. Of course, she attacked her while she (Summer Rae) was wearing a pencil skirt and go go boots so her decision-making was clearly flawed.

The actual match isn’t bad. I seem to recall them having a like three minute match a month or two earlier than this that was really good but this was fun. Can’t imagine why Summer Rae has back problems now after the crazy ass bump into the ring apron she did.

They make the announcement that they are allowing Adrian Neville to select a new tag team partner and – SHOCKER – he picks Bo Dallas. Of course – the WWE never canonically considers Bo Dallas to be a tag champ so that amuses me too. Anyway – they ALSO announce that since the Wyatts just beat Neville/Dallas (amazing how they just happened to be together in that previous match) they are getting a title shot next week. So that is done but what I wanna talk about is that the image they use for reasons know to no one – have Erick Rowan in his tiny ass black trunks. 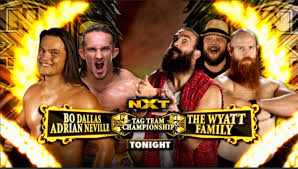 I am just gonna say that that could be quite the teachable moment for the Full Sail kids.

No one will fucking care about this but me. They promote the match as “If Jericho loses, he must join the Wyatt Family” even going so far to include it in a promo earlier in the show. When the actual match happens, the announcers don’t bring it up once. Yes Jericho won so it is a mute point but man was that irritating.

In fact this is as good as time as any to mention the announcing as a whole. Lord, it was a treat when William Regal called a show. Lord, was it a shit show whenever the dude who wasn’t Young Boy Tom and Brad Maddox where there. (Tony Dawson. That’s his fucking name. For a brief moment I was so happy my brain had blocked that out but then I was reminded that my brain hates me.) Regal restraining himself from cold-cocking Maddox shows that he is a better man than me. (Hmm… maybe using cold-cocking isn’t the best phrase to use in a sentence with Maddox. I feel like that is what he did to Paige. I am scared to look at Urban Dictionary.)

The WWE really digs this match going so far as to put it on the NXT Greatest Hits Vol 1 DVD. If you remember any of the Jericho/Bray main roster matches – this is better than them but that isn’t saying much. They build the match around Wyatt Family interference. Erick Rowan, and only Erick Rowan, gets ejected super early for interfering. Luke Harper gets to stay so he spends the rest of the time trying to interfere a bunch because the ref is stupid. Jericho wins with the Walls of Jericho. Eh… not thrilled about that result but they had backed themselves into the corner with the stupid stipulation/non-stipulation thing. It would have been more acceptable if Bray was immediately called up but the Wyatts hung around for like two more months. Whatever.

This specific match was chosen by Dolfan after I, rightly, pointed out that he was like the sixth person to post a video on the board. That’s all we do now. Race to get our shit in because clearly my post is more important than anyone else. I am going to get all the likes! MEME~! MEME~! MEME~! Guys – you totally haven’t seen this photo of Triple H punching Kurt Angle yet! How about if we combine it with Homer Simpson getting punched? Oh… that didn’t go over as well. Umm… this guy has a lot of muscles. Better break the glass on the emergency Vince reacting to bodybuilders GIF. Shit! You saw that already. Well… did you know I totally think the biggest way to make money is have CM Punk Main Event Takeover and then that fucking California New Japan show and then WrestleMania. Then. THEN! He can main event All In against Cody Rhodes. GREATEST WRESTLER EVER~! #ALLIN~! Oooh… ooohh…. Meltzer will totally say that he is going face Brock at a UFC PPV and I will totally believe it. Okay… finally, here is Sasha Banks again. It is totally not creepy that I am posting this picture. She has pants on! And a sports bra! No I wasn’t wearing pants when I hit submit. Why do you ask?

Where was I? Or right. Vince saved America and killed all the terrorists

I am at the point in my life… since I have seen more shit… that the idea of a multiverse makes more and more sense. And within that – somehow – we all ended up in a parallel universe. The universe where Vince McMahon truly did save America after the events of 9/11. I mean how else is a member of the WWE Hall of Fame President? And Linda McMahon is a cabinet member? And this country sure as fuck is being booked like a 70+ delusional man is in charge.

I was gonna joke about how Vince was the only one to stand up to Al Qaeda because running a Smackdown show that week sure as hell showed them. I mean if I was constructing my attack on America after going after all my original targets the next thing on my checklist would be a wrestling show in Houston. God – I truly believe that Vince truly thinks he could have stood out on the street in New York City, swatting away planes from the Twin Towers with his dick but the Democrats, FCC, Parents Television Council and Ole Anderson had let him.

Oh the match… we should all be as fortunate as Kurt Angle to be an Olympian who happen to have a PPV in their hometown.